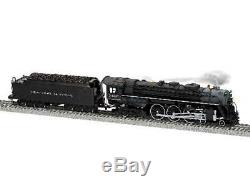 Introduced in 1937, the J3 held prime passenger assignments until the arrivals of the Niagara's nearly a decade later. Over two decades of service, the appearance of the class changed as well. This new release, the first in over 15 years by Lionel, includes several of those changes, matched to photos of each locomotive in a particular era. LEGACY® Control System equipped able to run in LEGACY® Control mode, in TrainMaster Command Control mode, or in Conventional mode with a standard transformer.

Powerful maintenance-free motor with momentum flywheel. Wireless Tether connection between locomotive and tender. ElectroCoupler on rear of tender. Directional lighting including operating headlight and back-up light on rear of tender.