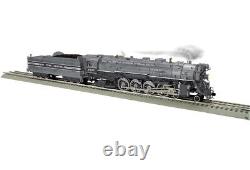 But by any name, the New York Central owned more 4-8-2 locomotives than any other line - and they were built for speed. The first Mohawks came in 1922. Within three years however, a new class emerged to a much more modern design. The L2a class numbered 100 locomotives strong and were most easily identified by their Elesco feedwater heaters in front of the smokebox. The L2a is regarded as one of our most finely detailed and proportioned models.

And now it's better than ever with the latest in LEGACY and Bluetooth control and Whistle Steam! The model will be available in several prototypical paint scheme variations, a custom weathered version, and two "fantasy" schemes sure to attract a lot of attention!

The New Haven's R-2a class of Mountains were nearly identical to the Central's L2a, so we've included one for that road as well! LEGACY® Control System equipped - able to run in LEGACY® Control mode, in TrainMaster Command Control mode, or in Conventional mode with a standard transformer. Operate with Universal Remote or Bluetooth® Control via the Lionel LionChief App.

Directional lighting including operating headlight and back-up light on rear of tender. Bicolor illuminated classification lights on the front of locomotive where applicable.

Sequence Control: plays the sound effects of an entire trip, including warning sounds and announcements, based on the movement and speed of the locomotive. Current speed and fuel dialog, coal or oil loading sound effects. Rail Line: New York Central.